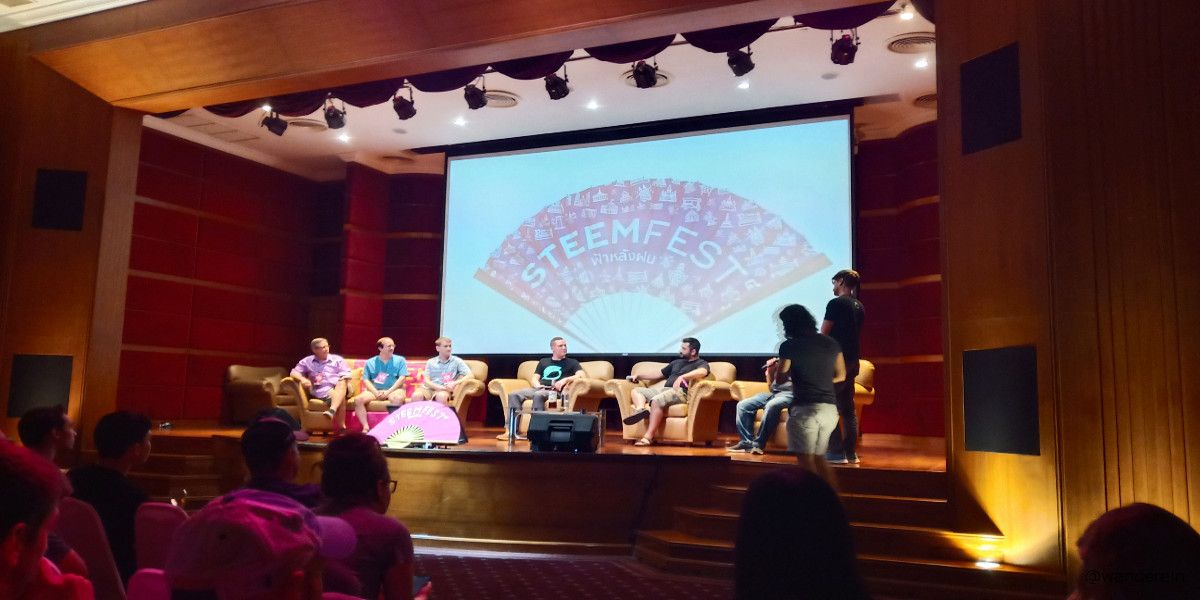 It wasn’t difficult waking up. There was a loud bird residing on the tree near our hotel. It was annoyingly loud but useful as an alarm clock! The day started fun riding a boat to the venue and found others at the boat station. It was quite far but we made it just on time.

The presentation starting with Steemit Inc was interesting and I was satisfied that they showed us something more realistic. I heard a lot of things about them but I can’t really judge because I haven’t seen them work and I have not done my research so I'm not in a position to say something. Although I felt that they were out of reach previously. Showing up on SteemFest was a good sign for me that they wanted to reach out to us, the actual users.

I want to be honest and there was a part when people were leaving the venue in groups to get drinks just when one of the presenters started and it got really noisy. I don’t know if people are aware. It was difficult to hear the speaker and if I were the speaker, I would be upset when the audience chatter overpower my talk. Maybe people are really so excited to see their friends but I personally find it rude to talk loudly inside the conference room when someone was presenting. I hope people are more aware of their actions.

On the way to the temple, I met @cryptospa and @vesytz and I joined them as we walked our way through the crowded train station. It was amazing how the Steemfest staff was able to manage such a big group in this chaos!

I like the part when we were given time to meditate or just sit there in silence. After hours of socializing, I really love my ME time.

For bowling, I joined @elizacheng, @livinguktaiwan and @travelgirl to form our LOA group - @ladiesofasia. It was funny that they set up us against Team Nippon, we thought maybe because we do not have someone from Japan attending Steemfest. It was fun and though I can’t really play bowling. I think I just hit the pins by luck but most of the time it would go to the gutter! In the end, we were a tie! We eventually lost to Team Germany, who I heard, has always won this game. Congratulations!

The third day of conference gave me more confidence on the direction of Steem. I may not understand the technicalities, but for me as a user, it looked to me that they are now working on projects that are of real use to the outside world and which are formed on a business model.

I was also excited this day because @travelfeed team presented and am looking forward to their roadmap. I have just downloaded the app as well and have been receiving notifications which was a cool new feature.

I joined TravelFeed team for the round table and we decided to stay for the next round which was for 3Speak. I was just a listener most of the time, trying to take in as much information. At one point, I was asked if I can say something and I have to be honest that for me half was really technical. It was something I have expected and that was the reason I was there, to learn more. However, I posed the question on how they can attract normal non-technical end users without overwhelming them with so much information and everyone provided ideas on how to train users like having video trainings.

In the Philippines, we have this funny expression "nosebleeding" which we say when we find something difficult to understand.

I accidentally got into a very technical meeting, beyond what I can comprehend! I asked what the round table was about and someone said that it was about connecting apps and communities and so I stayed. The TravelFeed team was also there so I thought it was just the right place. It was not long before I realized that I was in the wrong meeting!

They already closed the door and quickly got into their meeting. It was a developers' meeting! I was “nosebleeding"! I was contemplating whether to walk out but I don’t want to be rude and distract their conversation so I stayed and listened. I didn’t understand 90% of the terminologies they used but I think it was also good that I accidentally joined the meeting. It made me see how serious these people are in working together. Previously, just seeing things on the web makes me think that this is all but a game and I’m sorry to think that but now I see real people really putting their time and effort in their projects.

It was embarrassing but it was cool to also see behind the scenes.

Dinner by the river

During dinner, I told myself that I will just stay in one corner because I am not really good in socializing. I am interested in people but big groups intimidate me sometimes. But then as soon as I got my food, I found @vaelriey, @vesytz, @cleanplanet and @corsicana got into interesting conversations again. I have talked to several people that night and I know I won’t be able to mention most of them. Sorry my memory isn’t so good in remembering usernames but I do remember their faces.

After some interesting conversation about politics in the real world, @ladiesofasia represented by me, @elizacheng, @livinguktaiwan, @travelgirl and joined by @gandalf – our new recruit and I guess he passed because he had long hair – went out to explore the streets. @livinguktaiwan has our photos and provides more detail in her post (an excuse for me to end my writing here!).

The Travelfeed team and I are now in Chiang Mai to prepare for meet ups and have just had the time to finally contemplate on what just happened! I have just attended my first Steemfest and I could not wrap up my experience in words. It was educational and fun at the same time for someone like me still learning my way through this technical platform

It's been several months since I published a post. I must admit that my writing skills have become rusty. Last year, I had to think about what works and what doesn't for my digital nomad life so there were some things which I had to give up. My first two and a half years as a digital nomad was a series of trial and error.  I also switched jobs more

We were strolling in a peaceful street in Vang Vieng, Laos when a hyper puppy saw us and decided to approach us. The puppy seems to be in his teething stage and wants to bite on anything and that day he decided to cling to my pants. I slowly tried to get out and shoo the puppy away. I thought everything was fine until I took a shower in the evening